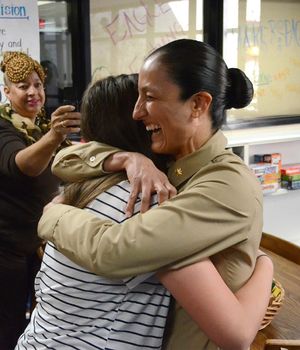 The surprise visit was arranged by the Labay Principal Dr. Patty Mooney and a family friend of Garza’s. Dr. Mooney invited students from Anna Coronado’s class to the school library to create "thank you" posters for #veterans.

While they worked, Mooney announced she would bring in a visitor to assist them with the project, and Major Rojas entered the library from an adjacent room to set up the emotional embrace between mother and daughter.