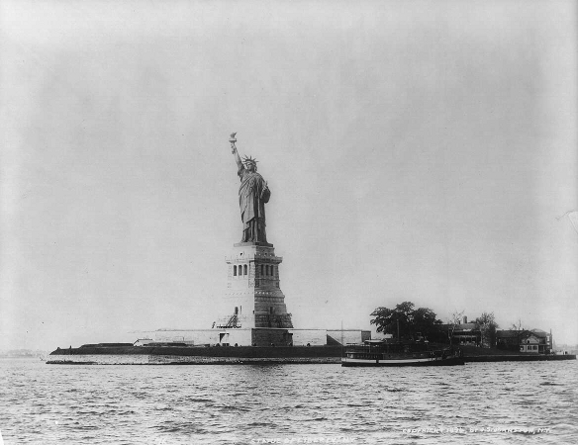 
On June 17, 1885, the Statue of Liberty arrived in New York City. “Give me your tired, your poor/Your huddled masses yearning to breathe free,” was placed at the base years later. These famous words are symbolic of America’s vision as a land of opportunity for immigrants. For nearly 62 years, more than 12 million immigrants passed by Lady Liberty as the entered New York Harbor.

Did you know...?
- The statue was initially scheduled to be finished by 1876, the 100th anniversary of America’s Declaration of Independence.
- The statue cost France $250,000 which is equivalent to more than %5.5 million in today's dollars
- The statue arrived dismantled in more than 350 pieces and had to be re-assembled upon arrival.
- The statue was located on Bedloe’s Island, later renamed Liberty Island.
- The statue weighs 450,000 pounds.
- The statue stands more than 305 feet from the base of the pedestal to the top of its torch
- The statue was the tallest thing in NYC at the time of its arrival
- The statue was originally a copper colored, but over the year, through natural processes, has turned a greenish-blue shade.
- The statue was dedicated on October 28, 1886, by President Cleveland, who said, “We will not forget that Liberty has here made her home; nor shall her chosen altar be neglected."